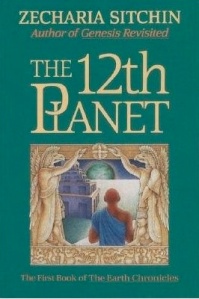 The 12th Planet
by Zecharia Sitchin

The story of humanity’s ancient past as interpreted by Zecharia Sitchin (and Erich von Daniken) has been popularized as of late by the History Channel television show “Ancient Aliens.” In his book, Chariots of the Gods, Von Daniken has shown that ancient cultures from around the world have left clues to suggest that our Gods of old are actually advanced extraterrestrials. Sitchin interprets ancient Sumerian, Akkadian and Babylonian texts according to a similar premise.

The Premise
The basic premise behind The 12th Planet is that the ancient Gods of humanity are actually extraterrestrials whose home planet is Marduk (also known as Nibiru). Marduk, according to Sitchin, is the twelfth celestial body of our solar system (the Sun, Mercury, Venus, Earth, the Moon, Mars, Jupiter, Saturn, Uranus, Neptune, Pluto and Marduk) and orbits the Sun in a 3600-year orbit.

These extraterrestrials from Marduk are divided into two classes – the Deities and the Annunaki. The Deities are the gods of old – the elite class. The Annunaki are the worker class. 400,000 years ago, the Mardukians began making settlements on Earth and began establishing royal lineages. While the Deities ruled these settlements, the Annunaki mined the Earth’s resources.

Around 300,000 years ago, the Annunaki rebelled against their toil, and the Deities responded by creating Mankind to carry on the work in the Annunaki’s stead. Mankind was created by a genetic hybridization of homo erectus and the Mardukians.

Mankind was created to be the slaves of the Mardukians.

The Deluge
Sometime around 13,000 years ago, a global cataclysm occurred. This idea is, apparently, supported by science. Although I have not personally seen primary source material to support this, the anecdotal support is quite large. Between scientific hearsay and the mounds of ancient texts that support the idea of an ancient global cataclysm, I’m of the opinion that there truly was something akin to a global flooding sometime around 11,000 BC.

According to Sitchin, the Deities knew of the impending cataclysm. It was to come as a result of the tidal influences of Marduk’s orbital approach. But the Deities were displeased with Mankind – for reasons that I don’t find altogether clear. As they evacuated planet Earth, they left Mankind to wash away. However, there was one God, Enki, who had been deeply involved in the creation of Mankind; and he chose to save one set of human beings. This story would become the basis of the Noah myth.

He Who Tells the Story …
John Lamb Lash, author of the mind-blowingly brilliant tome Not In His Image (soon to be reviewed on this blog), made a very astute point during a radio interview. He said, and I paraphrase, that these Mardukian Deities, who have undoubtedly exerted their influence throughout Mankind’s history, have proven themselves to be trickster gods. And we should be wary of taking their stories at face value.

It seems quite logical that it would serve the Mardukians to convince us that we are their slaves — because ultimately, isn’t that what they want?

It seems likely that the Mardukians did have an influential hand in jump-starting our civilization, because some of the most monumental societal achievements have occurred in 3,6000-year intervals:

11,000 BC: Agriculture and the domestication of animals began.

3,800 BC: Sumerian civilization appeared as if out of nowhere – along with textile weaving.

Where civilizations sprang to life, so did royal dynasties – dynasties that not only claimed direct lineages to the Deities, but whose existence rested solely on the Deities’ blessing.

“As time went on, the gods became overlords, each jealously guarding the territory, industry, or profession over which he had been given dominion. Human kings were the intermediaries between the gods and the growing and spreading humanity. The claims of ancient kings that they went to war, conquered new lands, or subjugated distant peoples ‘on the command of my god’ should not be taken lightly. Text after text makes it clear that this was literally so: The gods retained the powers of conducting foreign affairs, for these affairs involved other gods in other territories. Accordingly, they had the final say in matters of war or peace.

“With the proliferation of people, states, cities, and villages, it became necessary to find ways to remind the people who their particular overlord, or ‘lofty one,’ was. The Old Testament echoes the problem of having people adhere to their god and not ‘prostitute after other gods.’ The solution was to establish many places of worship, and to put up in each of them the symbols and likenesses of the ‘correct’ gods.

“The age of paganism began.”

The Creation of the Solar System
The creation of our solar system, according to the ancient Babylonian, Akkadian and Sumerian texts, assigns each of our celestial bodies with the personage of a Mardukian Deity. And Marduk itself is granted the title of the King of all the celestial bodies.

According to this creation story, our solar system began with 11 bodies – the Sun, Mercury, Venus, Mars, Tiamat, Kingu (Tiamat’s satellite, which would eventually become our Moon), Jupiter, Saturn, Pluto, Uranus and Neptune. Then the wayward Marduk was pulled into our system. Marduk threw Pluto off its orbit (sending it to its current place as our system’s outermost planet) and smashed into Tiamat. The result of this collision created the Earth and the Asteroid Belt.

Rocket Ships
One of the issues I have with Sitchin’s reading of the ancient texts is his interpretation of them in light of 20th century technology. One of the main sources of Sitchin’s astronaut theory is that Sumerian symbology points to the idea that the Mardukians traveled back and forth between Marduk and Earth using rocket ships that were “chariots of fire.”

The symbols that Sitchin identifies look like pointed, multi-stage rockets, often with fire shooting out the back ends.

I have a hard time believing that extraterrestrials with the ability to supposedly genetically create Mankind were saddled by combustible fuel technology. Although we’ve made significant advances to combustible fuel technology over the past 150 years, it is still a 150-year-old technology. And the only reason we are still saddled with this archaic technology is because alternative propulsion systems have been suppressed by the global cabal that aims to keep us addicted to petroleum.

In fact, Sitchin, in my opinion, is hamstrung by the same handicap as Darwin. Both fail to see a Universe endowed with consciousness. Both see the Universe from a materialistic perspective in which we evolved consciousness as a result of evolving matter. I disagree with this concept. We are, rather, beings of Light, eternal sparks of the Source that have descended into the material plane.

When we die, is it our Mardukian overlords that await us on the spiritual plane?

The 12th Planet also makes no mention of our Lemurian and Atlantean heritage. In fact, I would suggest that it serves the Mardukian agenda for Humanity’s memory of our Lemurian and Atlantean past to remain severed. And the stories told in the ancient Sumerian tablets do just that. They replace our actual pre-diluvian history with a history of their own making – a new history that places the Mardukians as the creators of Mankind.

Humanity’s Story
Despite my doubts, I’m confident that there is an enormous amount to learn from decoding, deciphering, interpreting and understanding the ancient Sumerian, Akkadian and Babylonian texts.

But it is only one part of the story.

The Mardukians may very well be the force behind the global cabal that aims to enslave mankind this very day. And to understand fully what kind of situation we are in, I’m confident that it will take a deep understanding of whence we came.

Art & Literature of the RPG Trade.

Linda George's blog on astrology, consciousness and the journey