Financial Vipers of Venice: Alchemical Money, Magical Physics, and Banking in the Middle Ages and Renaissance 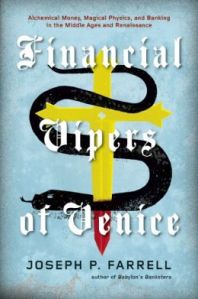 In Babylon’s Banksters, Joseph Farrell dug up an ancient international class of bullion brokers, their penetration of the ancient temples, their control and suppression of an ancient knowledge and their strategy for usurping the money-issuing power of states and nations. Financial Vipers of Venice is the sequel to that ancient tale where we fast forward to medieval times, in the midst of a 1500-year story of a foggy swamp that became the financial center of the Western World.

Mr. Farrell approaches his books like expanded essays, and structures his contents in clearly delineated outline form. This is fortunate for the reader trying to keep pace with the weaving complexities of Farrell’s narrative. And there certainly is a narrative … only it’s delivered with all the twists and turns of a Tarantino movie.

“To sum up, thus far Bruno has accomplished the following…Subtly challenged the Calvinist doctrine of debt-interest in the hands of a private monopoly by distinguishing it from the ‘the public wealth,’ which is, in the final analysis, a not-so-subtle attack on the very idea of private monopoly central banking, that is, upon the banking practices of the northern Italian city-states, Florence and Venice, themselves.”

The answers Mr. Farrell uncovers reach into the heart of what differentiates Hermeticism — an ancient universal spirituality with roots in ancient Egypt — from the monotheistic religions that sprung up centuries later. Mr. Bruno reportedly had a vision of uniting the whole world under one single spirituality — Hermeticism — in which we are all connected to an infinite divinity — a philosophy of abundance. This vision stood in stark contrast to the debt-based philosophy of monotheism’s “original sin,” a debt which is impossible to repay.

Clearly, Mr. Bruno intended to upset the religious applecart which Mr. Farrell contends was a direct philosophical threat to the time’s dominant fiscal philosophy — a philosophy belonging to the elite oligarchy of medieval Venice.

“…for not only did these [Babylonian] slaves bring with them their religion and culture — a point that would explain the increasing ‘orientalization’ of the Roman imperium — but they also brought with them ‘their “Babylonian” business and banking practices.’ And of course, when Attila the Hun ravaged the peninsula and threatened even Rome itself, many of these mercantile families fled to northern Italy. It is here that we find, then, the connection between ancient Babylon’s ‘bullion brokers,’ Roma, and the later Italian city-states, with their banking oligarchies.”

Venice
Mr. Farrell engagingly paints a picture of medieval Venice ruled by an oligarchical elite, a network of families and familial relations that even then, spanned the centuries. Members of this elite network played influential roles in all parts of Venetian society — from political and military leaders to heads of banking and business. The tactics that Mr. Farrell illuminates bear a striking resemblance to the playbook of today’s oligarchy.

For instance, in describing one of the Venetian super-companies, Mr. Farrell states:

“A glance — and it can only be a glance — at the rise of the Peruzzi company will demonstrate just how quickly the medieval super-companies mastered all the techniques that many would now ascribe to the conspiratorial machinations of modern banksters, corporations, and groups like the Bilderbergers, the Council on Foreign Relations, the Trilateral Commission, and so on.”

Clearly, the oligarchy rigs the game in favor of those within its circles, as the rise of the Venetian super-companies demonstrate. This was done by spreading into society, almost like a cancer.

“The penetration into the loci of public power — the church, professional occupations, military, and the organs of domestic and international politics — became the ‘playbook’ for financial elites ever after, and…the Venetians perfected this strategy to a very fine art.”

“Maintain careful posture of public neutrality in cases of political conflict, while continuing to act as financial agents for both sides.”

An Unbroken Story
Mr. Farrell outlines certain tactics of the medieval Venetian oligarchy which we find in eerie continuance by today’s 21st century global oligarchy. Using balance-of-power diplomacy to play both sides of a battle; absorb philosophical rivals; suppress hidden knowledge; and on. The continuity of strategy is certainly no passing matter.

“Consequently, one sees two familiar patterns — first appearing in ancient times, and continuing into modern times — of a financial elite that is actively seeking ancient sources of information, and seeking to monopolize and suppress it, lest that knowledge break out of the closed system of finance that made their power, position, and prestige, possible.”

Is it possible that there is an unbroken story that weaves through what we know of ancient Babylon, medieval Venice and our modern New World Oligarchy? Is there an ancient wisdom that has been suppressed this whole time, a wisdom that by its very suppression has allowed a small network of families to maintain control over humanity throughout recorded history?

The idea is definitely tantalizing and logical, at the least. Personally I think this idea holds a lot of weight. Though perhaps we’ll never truly be able to say whether it is or isn’t fact — simply because the genealogical and financial records to prove the theory likely no longer exist. Nevertheless, the Hermetic wisdom that Giordano Bruno tried to spread is likely no small matter. And for that, the Inquisition burned him.

It might be worth considering that if methods of empire are similar between today’s oligarchy and the oligarchy of Mr. Bruno’s time, then perhaps the two share in common methods of enforcing their control as well.

Art & Literature of the RPG Trade.

Linda George's blog on astrology, consciousness and the journey